Three Babies. What to Expect in the Early Days with Triplets

When we arrived home from hospital, the triplets were two weeks old. I remember the feeling of being at home with three babies, left to our own devices, being really strange. Having three babies in the house was surreal and I didn’t really know where to start. I felt like I had a million things to do settle them in. I wanted to make everything feel ‘ready’ but didn’t know where to start.

Initially, we had three Moses baskets on stands in our living room, which they slept in during the day. We’d carry them up to our room, in the Moses baskets, when we were went to bed. In hospital they initially fed on demand. Then we were lucky enough to get a family room, the weekend before we left, so we tried out four hourly feeds. When we left hospital, the triplets were on a four hourly feeding schedule at 6am, 10am, 2pm, 6pm, 10pm &  2am. It took 90 minutes to 2 hours for each feed as they were slow and it took a while to wind them. During those first weeks I remember they slept lots and although feeds took a long time, they settled in between. It was a little less chaotic than I expected.

Falling into a routine with three babies

I wasn’t able to breastfeed so we solely bottle fed and tried to get a sort of routine going. We did the 6pm feed together, then I went straight up to bed at about 8pm and tried to get some sleep. The idea was that their Dad would do the 10pm feed on his own and then carry them all upstairs in the Moses baskets. I would then do the 2am feed on my own and he would be able to sleep from midnight to 6am.

It was a great idea in theory. However, I often have to wake up and help with the 10pm feed as they cried to be fed at the same time. Also at least one, if not all of them, would cry in between feeds. I’m still glad we had a rough plan for the night though, as some days it did work out. I just wish I hadn’t been so hard on myself when it didn’t.

When I went to bed I’d take enough bottles for the 2am and 6am feeds plus the ready made Aptamil bottles which I just poured in the night. I always did this, so that the triplets got used to drinking it at room temperature. It saved me time making up the bottles in the night, although it was more expensive.

After a few weeks, we bought a travel cot for them to sleep in together during the day. This worked out well and saved us the effort of carrying the Moses baskets up and downstairs. We looked for any possible way to make things easier by maximising sleep and minimising effort!

When they were around 8 weeks old one of the babies was admitted to hospital for a week with a urine infection. It was also around this time that they were all a bit more awake and a little more unsettled. They slept less and cried a lot more and both of the girls were particularly unsettled after feeds. There were periods of time where they cried one after the other and it felt never ending. They seemed to wake up constantly through the night.

When going through harder patches like this, we’d try changing something or other to see if it improved things. I stuck to feeding every four hours through the night but they cried so much between feeds. So, I thought it might be better to demand feed through the night. The idea being they’d settle between feeds and stop crying because they were hungry. However, after a while this was unmanageable. I constantly seemed to be feeding and didn’t have enough time to sleep in between. 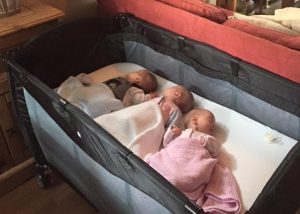 I tried moving them out of their Moses baskets into cots, changing room temperatures, using dummies and changing bottles. Around this time, the girls were also put on Ranitidine as the doctor thought they had reflux. Now, when other triplet mums share their successful night-time routine stories, I wonder how they stuck to it?

Every day I tried to plan how I would do things that day and night. Some days it would work brilliantly and I would be elated that I had ‘cracked it’. They fed every four hours and everyone slept well in between feeds. I might have even have slept for three hours in a row. Other days would not go so well. Feeding was all over the place and I felt fed up and frustrated that I couldn’t get it ‘right’.

Looking back with three babies

It’s so easy to look back now and see that I was getting it right every day because I was doing my best to look after three little babies. At the time I was always doubting myself, wondering why I was finding it hard when other people manage. When I read about other multiple parents it’s clear that everyone finds different stages more difficult. For me the bit between 3 months and 12 months was the hardest but I know some find the first few weeks the hardest and others find it harder when they are on the move. As two of my triplets suffered with colic and reflux, this made 3 – 6 months a particularly difficult time for us.

I really liked having quite a structured routine (on days that it worked!) but that doesn’t mean that’s right for everyone. What I’ve written is just a snippet of everything that went on in the early days. It was a complete roller coaster and everyone’s experience is very different and it really depends on your family, circumstances and children. I worried way too much about the little things and when I look back now I can see that it didn’t really matter, although it felt important at the time.

Top tips for the early days

Here are the lessons I learnt the hard way that others expecting multiples should know: