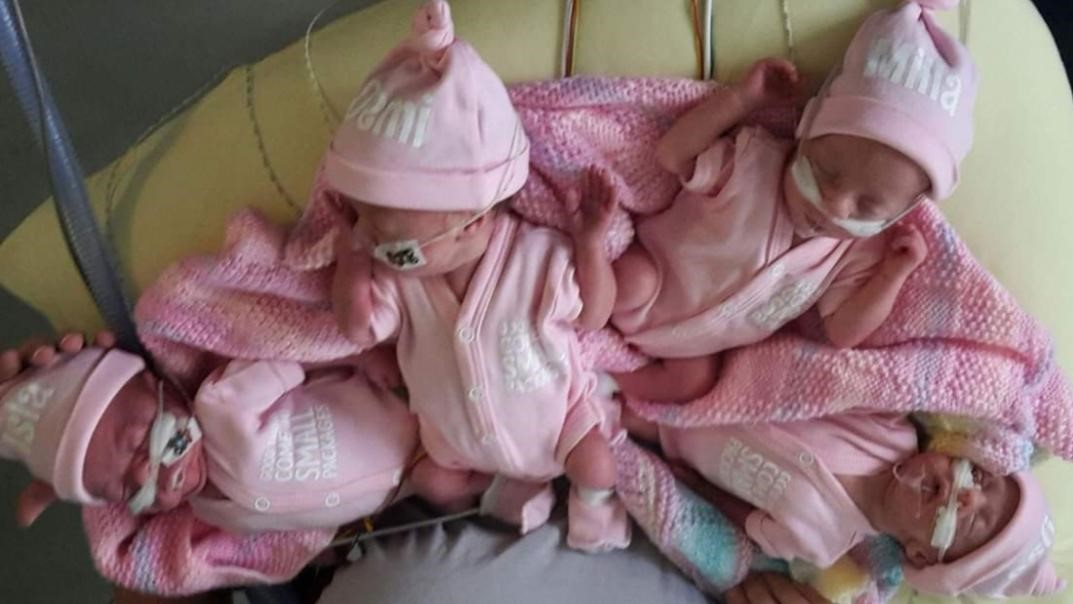 I prepared myself for NICU life as much as I could, after finding out the complications that might happen carrying quadruplets and the added danger of carrying 2 sets of identical babies we knew they would all be spending a fair bit of time in NICU assuming we even reached viability. I researched a lot about what complications they may have such as breathing difficulties, NEC, PDA and Brain bleeds. It helped to know what might happen and to mentally prepare myself. I also looked into what machines and equipment is used and why it’s needed, I like to know all possibilities so I can deal with them easier if they were to happen.

We made it past viability and even our consultant became hopeful for successful outcome. But my waters broke at 27wks 4days early hours on mother’s day!! We went straight to the hospital and the doctors confirmed that quad 1’s membrane had ruptured; the doctors hoped that on hospital bed rest I could still carry the babies for a few more weeks assuming we didn’t get any infections and the babies were in no distress. I was blue lighted to another hospital over an hour away as we required a level 3 NICU due the girl’s gestation and this was the closest that had 4 spaces available for my babies. When we were settled in the staff wheeled me to NICU to get us familiar, we were unable to go inside the rooms but it helped to know where things were like the family room for a cuppa, the loo and the expressing room so it wasn’t too daunting, hand washing was explained to us and the importance etc. 24 hours after my waters had broke Quad 1’s cord prolapsed and emergency c section was required, it was early hours so Paul wasn’t with me but at home with our eldest daughter, it was scary but had to be done. I knew as I was being put under general anaesthetic the next part of our journey was about to start, NICU life.

When I came round I was informed the babies were stable but that’s all they could tell me, I was in horrific pain, I had felt nothing like it before in my life. They informed me the babies were delivered within 10mins of the cord prolapse and all 1 minute apart, wow so quick so no wonder I felt like I had been hit by a bus and reversed back over a few times!. I was in and out of consciousness, when I opened my eyes again Paul was by me side, I begged him to go and get an update and photos of our girls but he refused to go until I was able to. He wanted us to meet our babies together but I think he was a little scared to face it alone. The staff came with photos of the girls for us but the quality wasn’t great at all and they all looked really hairy and ugly!!! Not what I imagined at all, they didn’t feel like my babies, I hadn’t seen them coming into the world and kept thinking what if they got mixed up or something, crazy I know!.  Also they looked like a normal size newborn baby in the photos, it really did not show or prepare me for just how tiny they actually were.

Eventually about 13 hours after delivery I was taken to NICU in a wheel chair to meet our girls in so much pain but I couldn’t wait any longer. It was a big room with around 15 incubators, I wasn’t expecting all the buzzers and alarms going off, they were pretty scary but then all the staff stood around as though these noises weren’t a problem! Because the girls delivery was an emergency it meant they weren’t prepared for them in NICU and their incubators weren’t together but actually in opposite corners of the room, I don’t know why but this upset me as they had spent 6 months growing inside all squished up but with each other and now they wasn’t even near each other. We were taken to Quad 1 first, as I looked through the incubator I felt a wave of emotion hit me, mainly guilt and I burst into tears. I thought it was my fault; my body had failed them, why couldn’t I have kept them cooking a little longer. What could I have done differently? Her tiny little body all skinny and bony, seeing all the veins through her transparent skin, it broke my heart, I was hysterical. I had prepared myself for all the wires, lines, tubes and machines but nothing can prepare you for seeing your child looking so fragile. The nurses were all so lovely, explaining how I had done really well carrying 4 babies to this gestation and that they very often see far worse outcomes in just twin pregnancies. Deep down I knew it wasn’t my fault but couldn’t help myself looking for answers. We were told the girl’s weights (2lb 4oz, 2lb 7oz, 2lb 4oz and 2lb 9oz) were good weights for their gestation and also their condition was great too. They explained that they were doing well, everything a baby at their gestation would be doing so nothing out of the ordinary. 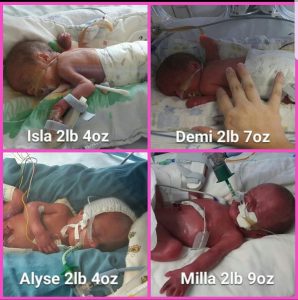 I remember asking “so what is their chance of survival” as in my mind I was still mentally prepared for maybe not taking 4 babies’ home. Unfortunately a pregnancy this high risk and with the health care professionals all being so negative from the beginning I never allowed myself to enjoy my pregnancy, I didn’t bond with my babies or get attached to them while pregnant as I was always waiting for something to go wrong. Anyway the nurse’s reply was “you don’t need to worry about that they are fine, all they need now is time to grow, learn to breath and suckle on their own and you’ll have your babies home with you before you know it.” Obviously we knew we still had the risk of infection, NEC and brain bleeds but at the moment they were in no immediate danger. It was at this point I looked at my babies and a rush of maternal love started to form an attachment to my babies and was positive we were going to smash NICU, they were warriors, my strong determined little girls all fighting to be here and after all they had beaten all the odd so far.

I started asking question about the equipment; lines, tubes etc were so I could actually see what I had read so much about, it made me feel comfortable knowing this information. I did feel a little useless as the babies were being taken care of by nurses and I didn’t know what my role was now. I thought the only productive thing I can now do for my babies is supply them with my milk to reduce the risk of NEC and of course for all the other health benefits breast milk gives. Once back at my bed I started with hand expressing, I was determined to do my best for these girls so would set my alarm and hour after I had finished expressing to start again even through the night. I had sent Paul home to be with Darcie as she had been with Nanny & Grandad since the early hours and must have been wondering what was going in on. My poor little princess only 3 years old and having to deal with such a big change that was about to happen. It made me feel so sad and guilty knowing I will have to leave her so much over the next god knows how many weeks while the quads were in NICU. Also being over an hour away I just didn’t know how it was going to work, but what will be will be, I’m sure it’ll all work out.

I was getting a good amount of colostrum (liquid gold as the nurses called it) the hand expressing every hour was definitely helping. A maternity care assistant took me to see the girls in a wheelchair to drop off my first syringe full, I was so proud to be doing something so important for them. The nurse caring for Quad 2 explained how well she was doing and would benefit from having kangaroo care, wow I get to have skin to skin I wasn’t expecting that so soon. My first reaction was to say no as Paul wasn’t there to witness it and I was so scared, she was so tiny and fragile, I didn’t want to hurt her. I made a call to him at home crying and struggling to get my words out. I asked if he minded me having a cuddle without him, I was so emotional!! He was happy for me to have cuddles but asked me to send him a photo; I was secretly hoping he would ask me to wait as I was so nervous. The nurse juggled the wires and tubes with ease whilst passing her out of the incubator and onto my chest, I was in awe of how confident she was at handling her, it made me relax a little knowing my baby wasn’t going to brake if touched her! She was so tiny but also absolutely perfect. I was so in love.

Find out more about