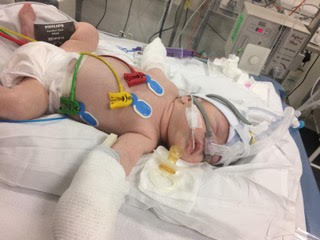 Hello, my name is Cheryl and my partner Chris and I became triplet parents on 12th October 2019 at 32 weeks’ gestation.  At 7 weeks old all three of our triplets developed severe cases of Bronchiolitis.

Our family went to hell and back for 12 long, hard days and we want to share our experience to raise awareness of this contagious, infectious disease in the hope that it encourages another family to recognise the signs earlier and take urgent action sooner than us.

We would like more people to know about Bronchiolitis and how serious it can be but we also want to show how different the onset and recovery can be for different babies to give hope to anyone going through a similar experience right now.

First of all, I would like to apologise for the length of my account of what happened. Almost a year on and it still feels very raw and traumatic and I have felt a lot of emotions replaying it in my head to share the whole experience. I find writing things like this down therapeutic though and instead of trying to forget I want to use all my grief surrounding it to do something positive.

Given that some readers might not read right to the end I want to start by sharing some information about Bronchiolitis (gathered from NICE, BESS, More Than A Cold, BLF, GOSH and NHS websites).

Bronchiolitis is a winter viral chest infection that causes breathing difficulties in babies up to the age of two, most commonly between 3-6 months of age. It affects the lower respiratory tract and is caused by an inflammation of the Bronchioles, which are the tiniest airways in the lungs.

The Bronchioles get infected, inflamed and clogged up with mucus making it difficult for the baby to breathe because the amount of air that can enter the lungs is restricted. This can lead to difficulty in feeding as the baby has to work so hard just to breathe.

The start of the infection usually looks like a common cold, including a blocked nose, cough and sneezing. After several days, breathing and feeding difficulties develop. Until this point, it is not possible to tell that the infection will cause Bronchiolitis. A diagnosis can be made if there are wheeze and/or crackles heard on clinical examination.

Bronchiolitis symptoms are usually mild and may only last for a few days, but in some cases the disease can cause severe illness. The condition is caused by infection with one of several different viruses but 80% of Bronchiolitis cases are caused by Respiratory Syncytial Virus (RSV).

Approximately 30,000 children in Britain are admitted to hospital with RSV every year, making it the most common cause of hospital admission during infancy.  It is estimated that one in three babies in the UK develops Bronchiolitis in the first year of their life.

These facts were shocking for us as we were not really aware of it.

There is no vaccine and no specific treatment for Bronchiolitis. In most children, Bronchiolitis is mild and their breathing and feeding will get better within 5 days, with a cough lasting around 3 weeks or more.

The majority of babies with Bronchiolitis do not require hospital admission and can be treated at home but some babies may need feeding therapy and/or supplemental oxygen therapy or intensive care where they can be given help with their breathing from a mechanical ventilator.  Premature babies and babies born with a heart or lung condition are most at risk from developing severe cases of Bronchiolitis.

It is rare for children to die from Bronchiolitis, those who do usually have underlying conditions. However, babies can deteriorate rapidly and there are some important signs to look out for and be concerned about if they worsen. If you notice any one or more of these signs, I urge you to get immediate help.

If Bronchiolitis was more commonly talked about, we would have known the important warning signs to look out for and maybe we could have acted sooner and lessened their fight. If we had left it any longer this story could have had a very different ending.  If we had been informed of the risk factors perhaps, we would have been prepared for what our family experienced.

The odds were against our trio. They were 8 weeks premature; they were only 7 weeks old; they had an older sibling in nursery and it was winter time. These factors made it inevitable and we wish we had been warned of the likelihood of the babies getting it, and so severely, upon discharge from NICU. But we weren’t and this is why I am turning our story into a warning for others.