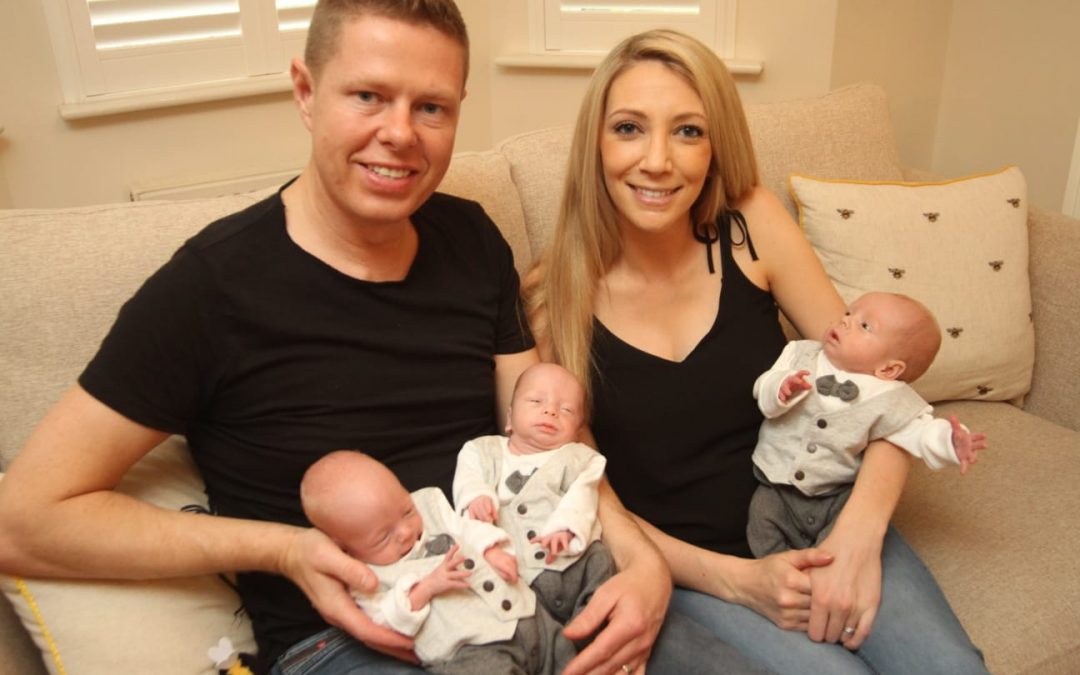 It is truly incredible what our bodies are capable of. When I decided I wanted to breastfeed my triplets I was met with a lot of disbelief from friends and also medical professionals, but I knew other triplet mums who had breastfed and had inspired me. All I needed to know is that it was possible.

Our breastfeeding journey began when my babies were born at 31 weeks, so I needed to establish a milk supply through exclusively expressing. Before the birth I had spoken to a lactation specialist at the hospital who explained how to hand express, something I hadn’t even heard of before, and she advised that it is best to start expressing within 1 to 6 hours after the birth. My csection was late at night after being transferred to a different hospital over 100 miles from home due to space in NICU, so afterwards I was exhausted and fell asleep. The next morning, I went to meet my babies in NICU and by the time I tried to hand express it had been around 18 hours since my babies were born. It was only just the beginning and already I feared that I was too late!

I tried the techniques as I had been shown, but little to no colostrum was being expressed. A kind midwife came to help me and showed me how to properly hand express and it hurt! I thought I was squeezing hard but apparently not hard enough. My husband was a great support, encouraging me and collecting the tiny amounts of colostrum. I couldn’t believe how much effort it was for a tiny 0.4ml. I continued trying to hand express for the next couple of days, trying everything I could to encourage my milk supply. I would swap bonding squares with my babies, look at photos and videos, and have skin to skin wherever possible to help with bonding and lactation.

NICU started asking for more milk. I felt like I was letting my babies down. I felt like there was little increase and was still only getting very small amounts of colostrum, which I now know is normal. Its amazing how little milk babies need in those first few days. Feeling under pressure that I didn’t have more milk I began using the hospital pumps to help stimulate my breasts and express milk. Setting alarms to religiously express every 3 hours. I kept a diary of each expression time and volume, which helped to show progress even when it feels like there isn’t any. I had no idea how much of an emotional rollercoaster the start of breastfeeding would be. NICU offered donor milk which I accepted to take the pressure off as I know that only makes the milk harder to produce.

On day 4, I woke up in shock at how much my breasts had filled with milk overnight. My milk had arrived! I was heavily engorged and felt like my breasts were going to burst through my skin. I spent the day trying all techniques I knew off to relieve some of the pressure. I spoke to the midwives and messaged my friends, I applied heat, tried to pump, massaged, etc but nothing seemed to be helping and by 10pm I was crying under the hot shower trying to ease the feeling of ever growing breasts. Thankfully the next day I managed to get my milk flowing, and was so proud of my body for making the milk my babies needed. I felt such a relief that I had done it, I made some milk! I continued exclusively expressing breastmilk for the next 4 weeks until my babies could learn to latch. It was exhausting! Sometimes I would sleep through the alarms in the night only to be woken in a puddle of milk and painfully engorged. At this stage I was producing much more than my babies needed so I took the opportunity to build up a stock in the freezer. When we were leaving NICU we had to buy a second freezer for all of my milk.

When I was discharged from hospital, I had one night away from my hospital grade double electric pump and was up most of the night trying to express with a manual pump but it just could not remove enough milk. The next morning, I had hot red patches on my breast – the start of the dreaded mastitis. I tried to persevere and pump through it, but the redness and heat was just getting worse. I missed two days of seeing my babies in SCBU and decided now was not the time to be a soldier I had to be a good mummy so I called the GP and surrendered to antibiotics. I didn’t realise how unwell I was until the antibiotics made me feel well again. I was concerned to have antibiotics in my milk with my babies being so young so used the freezer stocks in place of my fresh milk. I later used the antibiotic milk sporadically and my babies were absolutely fine, as I were told they would be, but something about being a new first-time mum means worry comes naturally.

Looking back, I am so grateful for all of the encouragement and support I received while my babies and I were in hospital. I am pleased that I kept a diary and watched as my journey progressed from hand expressing 0.4ml of colostrum up to pumping 3 litres of breastmilk a day! It took a lot of dedication to express every 3 hours 24/7 but I was determined to produce milk for them. Through all of the exhaustion and painful days I would do it all again. Knowing that I was able to continue protecting and nourishing my tiny babies after birth was an incredible feeding.